Torture is to deliberately inflict either physical or psychological pain on someone to get information from them or as a penalty for a crime. The process of torture is meant to get a conviction which is otherwise not easily possible.

The earliest civilizations used systematic torture to have their way. We learn more about these forms of torture from the ancient scriptures and monuments. In European history, Medieval Period or the Middle Ages started from the 5th till the 15th century. In the beginning of medieval era, Roman Empire fell and merged with the Renaissance or ‘rebirth’ of culture as we call it today.

Experts suggest that torture was carried out on people in the medieval era who were not considered full members of the society. Most common examples of such people include slaves, religious outsider groups and thieves. The trend of torturing citizens was less common, and they were tried only after committing a heinous crime.

Here is a short list of painful practices devised by the medieval people: This equipment was popular for causing psychological fear in victims. The chair featured several sharp spikes, which were installed on arm rests, back, seat, and even footrests. A total of 500-1500 spikes were present in a single chair. The victim would be forced to sit on the chair with their wrists tied by bars that would keep their arms on the arm rests. Torture would happen for days, and even though the spikes didn’t penetrate crucial organs, the victims ofteen experienced severe mental and physical breakdown.

This device featured upright metal bars (a total of three), with the middle one housing threads for the screw. The victims’ thumbs were placed in between the bars, and the individual interrogating gradually turned the screw, which pushed a metal bar onto the thumbs till they were completely squeezed. Some historians are of the opinion that the device as invented by the Russian army where generals used to punish soldiers who misbehaved.

Flogging, which is the act of beating a victim repeatedly with a leather whip, was also a common practice. The act was carried out until the victim become unconsciousness or confessed to whatever trial they were being held accountable for. Flogging is even practised to this day in places like Saudi Arabia. Some people also flogged themselves as a form of self-punishment for committing religious sins. 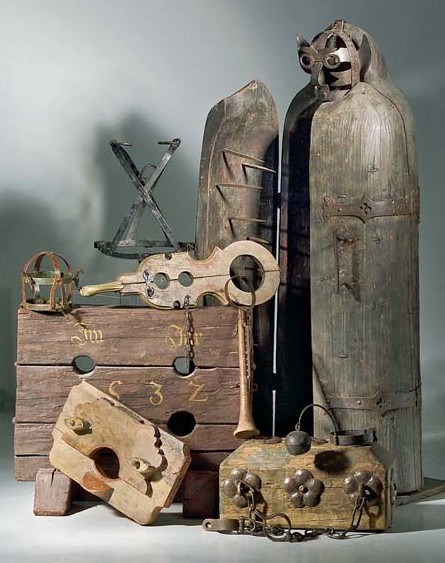 This is often referred to a life-size box with spikes present on its inside. As a medieval torture practise, a victim would be put inside the iron maiden, with their body and flesh impaled by the spikes until the box was completely shut. Some people say that the device was introduced as early as the 12th century.

In ancient Europe, citizenship was one important line that saved you from brutal torture. Normally, slaves were not even allowed to testify or prove themselves. They could be tortured even when serving as a witness for a citizen’s lawsuit. The element of punishment and torture was thought to bring more credibility to these slaves as they testified. There was no moral code that could save the slaves from getting punished for a crime they did not commit.

There was one case that allowed citizens to be tortured and that was treason. If any citizen, found guilty of treason was brought to the law, torture was the final settlement. In other events, people who were repeatedly found guilty by the state received a punishment for having a weak character.

Although the use of torturous exercises was strictly limited to legal regulation, things soon started getting out of control. The employment of painful procedures started crossing the limits prescribed by law and became even more hurtful to the poor people. Most trials started resulting in capital punishments and death. By the 12th century, forms of torture rose in intensity on citizens as well, even for ordinary offenses. Punishing women for witchcraft became a norm and the punishment was gruesome torture that need not be mentioned. The legal code was to find witnesses for people charged with a crime to maintain their innocence. If these people failed to prove their innocence, judges allowed a punishment to make him or her spill the beans. As the weapons effect theory summarizes, access to more torturous devices makes you more aggressive and it becomes normal.

Religious groups that followed beliefs different than the church were accused of treason. Witchcraft and treachery being a common charge on these people, it was difficult to maintain secrecy in such a society. If someone heard or felt something like this about a person, they would complain to the church and get the other punished. Soon, people started lying about their religious beliefs to escape torture and started naming others to put false blame. This started a spiral of false accusations and more forms of torture.

There was no end to this practice unless someone put an end to the painful methods of torturing humans. By the 18th century, governments and people started realizing that such punishments did more harm than good. Reformers started vouching against this practice and asked to abolish it on moral and ethical grounds. Scholars lit up the path even more in the 19th century and deemed these reformation movements as mankind’s ascent towards enlightenment.