The 5 Most Controversial Ads of August

Marketers are constantly trying to break new ground – push boundaries, get their names “out there,” and profit gloriously from it. August was a particularly interesting month for advertisements in the media, and we saw a number of them get pulled because of the backlash they caused. I’m not talking about some random political attack-ad that aired last month, but the regular products that everyday people consume. Mark Twain once said: “Many a small thing has been made large by the right kind of advertising.” For the brief collection of ads below, you be the judge.

In early August, Levi released their “Go Forth” commercial, showing a jeans-clad young man rallying against the authority in protests, amidst smoke bombs and huge crowds. It was the company’s first-ever global ad campaign, and it unfortunately came out at the same tame as the recent London Riots. See the one-minute ad here:

After the riots began, Levi “temporarily postponed” airing the commercial in the UK. As TheWeek.com asks, is this bad taste or just bad timing?

#4. American Apparel does it again

American Apparel recently came out with a shirt that seem critics say is glorifying teen sex. I guess for the ad campaign, they had the models be as least attractive as possible, to avoid the accusation that they were being sexualized. But… isn’t that the point of the shirt?

And you can totally tell these two know what they're doing

This may seem relatively harmless, except for the name attached to it – the CEO of American Apparel, Dov Charney. He has been sued by several young women for sexual harassment, and has a reputation of sleeping around with his young employees, not to mention the racy ads he has made. If this creep says “teenagers do it better,” it’s not just a statement, it’s probably his actual opinion, plastered on the chests of teens who may now wear it as a badge. I wonder what it would look like if there was an attractive teenager wearing this shirt out in public?

When someone spotted a JC Penny shirt a few days ago that said “I’m too pretty to do homework so my brother has to do it for me,” the Twittersphere went mad. 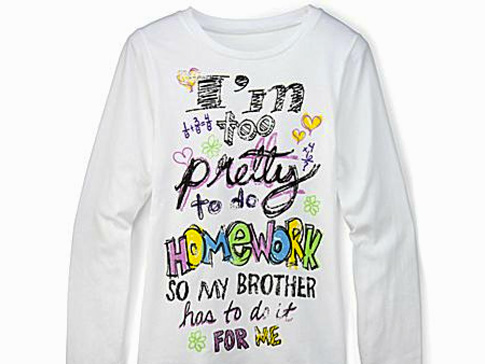 Terrible marketing. Just look, it only targets the market segment of bitchy girls who have brothers!

Parents and educators were particularly furious at the idea that a girl might walk around with an undeserved sense of entitlement, and that this message may teach youth that looks are more important than intellect in the real world. Within about four hours of it being spotted on someone’s facebook page, one activist began a petition that reached near 16,000 people. Before the day was up, after tens of thousands of people vying to get rid of the shirt left their signatures, JC Penny decided that it wasn’t worth it to keep the shirt, as so many people were readily willing to boycott the store. They released this statement as an apt apology:

“We agree that the ‘too pretty’ T-shirt does not deliver an appropriate message, and we have immediately discontinued its sale. Our merchandise is intended to appeal to a broad customer base, not to offend them.”

Nivea, the popular skin-care company had their ad published in the September issue of Esquire Magazine in which (as you can see from the title image above) a black man is holding a mask with an Afro (like a “before” to the model’s “after”), with the words “Look Like You Give a Damn – Re-civilize Yourself” displayed. Viewers were debating the level of racism here, but there was certainly a lot of people very upset by this. So upset, in fact, that Nivea’s parent-company made this statement on their facebook page after withdrawing it:

“Thank you for caring enough to give us your feedback about the recent ‘Re-civilized’ NIVEA FOR MEN ad. This ad was inappropriate and offensive. It was never our intention to offend anyone, and for this we are deeply sorry. This ad will never be used again. Diversity and equal opportunity are crucial values of our company.”

But it’s worth mentioning that there is also an ad of the same nature with a white man instead of a black man (see right), and there was no uproar about that. I don’t think it’s an entirely fair comparison though (i.e., an entirely racial-based comparison), considering how the ad with the Caucasian has a much more dynamic camera angle, better message, fancy suit, and he is standing in a cool pose… but like I said: You be the judge.

"Honey, have you seen my… oh you know what, never mind."

The woman sitting on the couch is done up in a nice dress, but she has an expressionless face with one black eye, which doesn’t even fashionably match the dried blood-stain on the rug! Okay, maybe there’s no blood-stain, but obviously, the implication is that she was beaten by her boyfriend. Mr. Right is standing behind her with what appears to be either an expensive necklace or an intricate eye-flogging device.

This ad certainly caused a shit-storm of controversy after it was well publicized a few days ago on a New York advertising copywriter’s blog earlier this week. The facebook community and organizations like the Alberta Council of Women’s Shelters and the Edmonton Women’s Shelter (“ACWSEWS” for short) were up in arms, and plenty of people – not just in Canada – called for immediate boycotts.

The owner of the salon said that the ad was intended to provoke discussion about the strength of women when they’re in difficult situations, and was shocked at the backlash. “If you look closely she’s strong, not looking at him, not accepting the necklace,” she said on the salon’s blog. See, I didn’t realize that until she said it. Actually, if you look even closer (maybe squinting helps), you might say that the tagline at the top is really geared towards the man, whose face is pointed down, as if rejected, dejected, and humiliated, at the fact that he can’t even get the girl to bend to his will even after beating the crap out of her. That’s when you know, fella, that you’re due for a hair appointment.

While some of the response has been positive, the overwhelming majority has been negative; and people in Edmonton seem to be more than “vocal.” That is, they took to the streets with one purpose in mind: premeditated vandalism.

On one window, vandals had spray-painted the words “this is art that is wrongly named violence,” with a pink arrow pointing to the next window, which reads “that was violence wrongly named art.” I can understand the reasoning behind it, but vandalism is not justified. The people who got rid of the JC Penny shirt and the Nivea ad are much more noble than criminals who deface someone else’s property.

Regardless, the ad has not been taken down from the website, but there are was a lengthy message added to the blog as a sincere apology and an explanation. In it, the owner writes “To kick things off any person that comes into Fluid from now on and mentions this ad we will donate proceeds from all services booked to the Edmonton Women’s Shelter.” The ad is actually part of a larger ad campaign of several pictures with the same theme, but they were not part of the controversy. You can see the other pictures here.

Is swearing in adverts a big deal anymore? Well, it was big enough to make several magazines reject an ad from the clothing company Diesel. They they released an ad saying “Diesel Island, the least fucked up country in the world. (But give us time.)”. It caused some backlash, but Diesel refused to get rid of it, and it doesn’t seem to be having much of an effect on their business, though there have been some calls for boycotts (probably by people who didn’t shop there to begin with). Still, based on the hipster get-ups and the random goat standing in the background, some might say this ad is guilty of false advertising.